"A Man Called Ove": Hard on the Outside, Soft on the Inside 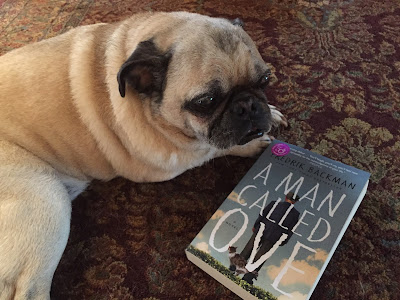 “Ove is fifty-nine. He drives a Saab. He’s the kind of man who points at people he doesn’t like the look of, as if they were burglars and his forefinger a policeman’s flashlight.”

We all know one curmudgeon or two in our lives.

These cantankerous individuals grumble at insignificant things that they really can't change.  Just the other day when I was at the local Jewel, I stood behind an angry older man who decided to lose his anger on the unsuspecting cashier.  He waited in line too long to buy his bottles of seltzer water and he wanted answers as to why they recently removed the self checkout aisles.  His words were condescending and rude, and he wanted very much to prove the point that he considered every employee at Jewel an idiot.

When I met the main character Ove of Swedish writer Fredrik Backman's debut novel "A Man Called Ove" I was reminded of every curmudgeon that I met while working on the farm (where they were rampant going as far as returning a quart of strawberries because they weren't juicy enough), or while I waited tables through college.  I thought of past colleagues when I was a teacher and even some family members.

Ove is the kind of man who sticks to his routine without fail.  He has black and white ideas about the types of people he likes (those who drive Saabs like he does) and those who he does not (those who are unable to back up a trailer or computer salespeople or those who drive on a on a motor vehicle prohibited street which is clearly marked or especially anyone who drives a BMW).  He walks around the neighborhood spreading more complaints than joy and everyone seems to be able to ruffle his 59 year old, cranky feathers.

But, everyone has a story to tell about how their past influenced their present day emotional status and Ove's story is one of sadness and hardship as well as love and companionship.  He grew up to be a man of principles and little compromise on his hardened belief system until he met the love of his life, Sonja, who was able to see the beautiful person that he was inside.  Their love story is full of touching moments. "People say Ove saw the world in black and white.  But she was all color.  All the color he had." Even when someone finds the perfect mate, life has a way of not turning out the way you expect it and Ove's life hardened him until his outer shell was so thick he didn't even want to go on living.

And that is where the reader meets him - when he's at the end of his rope from life's stupidity and outrage, missing Sonja's color in his life of black and white.  He would rather cease to exist than go on living.  At least that is what he believes.  When his new neighbors move in - Parvaneh (the pregnant mom), the dad (who Ove just names The Lanky One), and their two daughters - Ove's whole life begins to change.

I don't want to give away too much about this novel, because the real joy stems from the way Backman skillfully unfolds the backstory and present day story of Ove simultaneously.  At first I was irritated by Ove's unbending ways, but by the middle of the book, I couldn't wait to read more about his past and see what other circumstances would surface in the present.  Quite a few moments made me laugh out loud or smile.

And, yes.  I did shed a tear or two (maybe way more than that).  I love a good story about how even the hardest of hearts can soften (just think about how you watch The Grinch Who Stole Christmas or A Christmas Carol every single year), or how many people who seem like the grumpiest recluses are really the ones who have a history of good deeds and who are the most helpful in a crisis.

Redemption, friendship, love, a stray cat, an amazing cast of neighbors, a grumpy old man bent on ending it all, and the beauty of owning a Saab all combine to make "A Man Called Ove" one that might make you rethink your internal remarks about the crabby old men who yell at the cashiers in Jewel.  It will remind you for sure that everyone has a story to tell.

Posted by Rebecca Thiegs at 12:35 PM No comments:

"Chains": Another YA Historical Fiction Victory for Laurie Halse Anderson 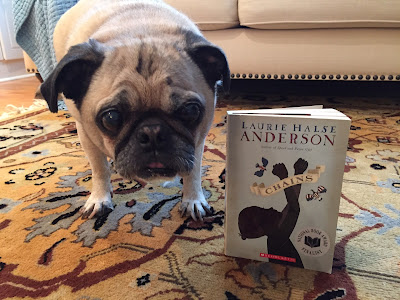 An Important Note: It has taken me awhile to muster the courage to return to my book blog.  My loyal friend and office assistant, Loki, passed away on May 26th 2016.  I've never had a dog that I loved like Loki, and it has been so much quieter and a little less joyful now that he isn't at my feet every day while I work.

But as in all things, life goes on, and whenever I see the stack of books that I have already read, the pictures of Loki with all those books (he absolutely loved to pose with books because he always got a special treat afterwards.  I only had to hold a book and my camera and he would run to a good spot and pose) and have yet to write about, I am reminded that it's okay to move forward even if it hurts a little.

As I have mentioned before, my daughter, Raina and I have our own book club.  There are only two members (the two of us), and we try to read a variety of books that we think are worth discussing.  A few requirements:
1) the book has to be something we both want to read
2) the book has to be one that neither of us have read (or if I have read it, it was so long ago that I don't remember it)
3) the book has to be substantial enough that we have something to talk about
4) we need to go out to dinner somewhere to discuss the book

For our third selection, we chose Laurie Halse Anderson's National Book Award Finalist, "Chains." Both Raina and I read Anderson's Fever 1793 and loved it, so we thought another glimpse into early American history would be a good bet for both of us.  Raina also decided that we needed to have our discussion dinner at the local restaurant, 1776 (clever, right?). Neither of us were disappointed by the harrowing insider's perspective of slavery in 1776 that Chains depicts (or with our dinner at 1776).

The story revolves around a 13 year old slave girl named Isabel and her sister Ruth.  When their mistress dies, her will states that the girls whose mother also died are to be set free.  Unfortunately, two young slave girls don't have control over their fate in 1776, and their former mistress's nephew refuses to consider that Isabel and Ruth are not property on which he can make a profit. Dismissing the fact that Isabel is able to read and read the will herself, he sells the sisters to a very wealthy Loyalist couple, The Locktons.

To say that the girls suffer under the ownership of Mrs. Lockton would be an understatement.  She takes an instant liking to Ruth, but casts her aside thinking she is infected with the devil after she has a series of seizures.  As much as Mrs. Lockton immediately likes Ruth, she feels the same in disdain for Isabel and makes it her sole mission to inflict pain and punishment on the independent, headstrong girl.

With heart racing suspense and uncomfortable torture scenes, Laurie Halse Anderson creates the tense world of life from the perspective of a young slave girl caught in the middle of Loyalists and Patriots at the advent of the Revolutionary world.  She explores the depths of torment and imprisonment as well as lofty ideals of loyalty and freedom.

Over a sea scallop spinach salad (say that 10 times fast) and a wood fired chicken pesto pizza, Raina and I both agreed that this was a great book that taught us so much about the life of a slave girl. Both Raina and I squirmed when Isabel was publicly branded for trying to escape.  We both loved the  relationship between Isabel and Curzon which showed that even in the most dire of situations, a friend is exactly what you need.  And, we also loved that Mr. Lockton's aunt looked out for Isabel and helped her to survive.

Raina thought that many parts were a bit slow, but ultimately that she really enjoyed this book.  She also thought that it was awesome that it took her deeper into the dynamics of the start of the Revolutionary War than what she learned in Social Studies at school.  I thought it was an amazing gazing ball into a tumultuous time in US History.  What I love so much about Laurie Halse Anderson is her attention to the historical accuracy of her historical fiction.  She included quotations from actual documents from the time period that coincided with what was happening in the story.  I can't remember ever being engaged in learning about the Revolutionary War when I was in elementary school, but if I had read this book, I am sure that I would have been captivated and wanting more information.

The best part of this book is the action packed ending which really isn't an ending at all because this is only part 1 of the Seeds of American Trilogy.  Although we aren't going to choose Book 2: Forge for our next book club book (we both decided that we needed something a little bit lighter for the summer), we both will read it as well as Book 3: Ashes (out in October 2016) because we need to know what happens to Ruth, Isabel and Curzon.

We are rooting for them!

Posted by Rebecca Thiegs at 12:15 PM No comments:

Stories connect us. At StageofLife.com we believe that we can change the world . . . one story at a time. By sharing your own experiences and thoughts on your stage of life, you can touch the lives of so many others. Share your story and change the world.

Rebecca Thiegs
Rebecca Thiegs is the educational voice and co-founder of StageofLife.com. She is a National Writing Project Fellow with a Masters of English Education from the University of Minnesota. Rebecca brings 15 years of high school classroom experience teaching honors Language Arts, Creative Writing, and Public Speaking. She is a five-year participant in the Summer Writing Institute at Millersville University, consulted on college curriculum development for the Summer Academic Enrichment Program at McDaniel College sponsored by the DC Success and the Bill Melinda Gates Foundation, and currently serves as a library board member in her community. Rebecca says, "One of my favorite things to do is recommend really great books to people (and tell people what books they should avoid reading). I spent 15 years as a high school English teacher sharing my zeal for books with 1,000s of teenagers, and now I am excited to blog about the books I read as we grow StageofLife.com into the interactive writing and reading resource it's become."

My YA Novel Recommendations